Spotify, the world’s largest streaming service, experienced low adoption of its service and revenue when it first entered Nigeria in 2012. For some years, it abandoned the country. Then, Nigeria’s internet and smartphone penetration were low. Besides, most users still use the 2G network.

Global players like Spotify and YouTube have had their eyes on Africa in an attempt to tap into the continent’s entertainment industry. Spotify returned to Nigeria in 2021, years after internet connectivity had improved in the country.

Large user base converted to subscribers

Media Research’s report reveals that MENA, Latin America, Africa, and the Asia Pacific will account for 73% of the world’s music subscriptions by 2028. The count started in 2020. However, the average revenue per user in these countries is 3 to 5 times smaller than in Europe and the US. The returns from the developing markets are low.

Since 2018, Spotify has established its streaming service in 48 African countries. The streaming giant obtains its revenue from subscriptions. Due to the low spending power of the continent, Spotify may not focus more on its operations in Africa. In case, you didn’t know, it’s important to read about 2021’s Best Music Streaming Platforms to understand the situation better. Midia Research, a UK research agency, reported a 26.4% increase in global streaming subscriptions in the second quarter of last year.
According to Midia’s estimations, the music streaming market had 521.3 million subscribers at the end of Q2, 2021. It recorded a massive growth of 109.5 million subscribers from the previous year. The 26.4% streaming growth worldwide did not translate into higher returns. The music streaming market obtained most of the increase from low-spending emerging markets. Audio branding, audio advertising, audiobooks, and podcasts are other offers from Spotify besides music streaming.

Do local platforms have advantages?

The local platforms, Boomplay and Audiomack, are hardly known in the West. However, they launched their services in Africa earlier than the top companies. When YouTube Music started its operations in South Africa, Boomplay had about 10 million downloads on Google Play. Mobile phones manufactured by China’s Transsion like Infinix, Itel, and Tecno have Boomplay apps pre-installed on them.
Transsion phones are widely used in Africa. People coming online are likely to use them, increasing the number of Boomplay app users. Boomplay already has 60 million users and is likely to have more in the future. The local platforms offer free streaming services to Africans at an affordable data rate. Besides, people can download and listen to music offline. 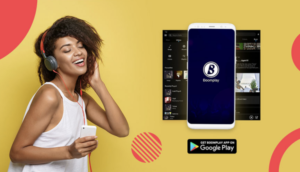 These platforms are avenues for the discovery of emerging African musicians. They expose the artists to new audiences and give them a ticket to stardom, even without a distributor or record label. Likewise, Audiomack partnered with the telco MTN to promote its services.
Abu Dhabi’s Anghami has the ideal potential as a local music streaming platform. It is the first Arab tech company that went public. Anghami serves the Middle East and North Africa (MENA) countries. The streaming platform partnered with well-known music firms: Sony Music, Warner Music Group, and Universal Music Group. By the way, there is some exclusive news, Universal Music to develop collectible NFTs in deal with the Curio platform. As of last year, Anghami has partnered with 37 telcos.

In 2021, African artists received $300 million from music streaming despite Africa generating much lower streaming revenue than the US. In the next decade, most of the music subscribers are likely to be from developing countries. Consequently, the continent’s revenue potential remains unattractive to companies across the globe. However, Boomplay and Audiomack hope to replicate the success of Anghami in MENA and in Africa.